It is built on Coldfusion and has some large elements of the UI built in Flash.

Mediaframe allows you to get access to brand-logos, fonts, colour schemes, images and brand guidelines. Brand assets can be downloaded in any size, resolution and file format.

The basic account is free for businesses so give it a try. Sign-up here.
There is also a demo account so you can preview the service.
Posted by John at 3:23 pm 150 comments:

Im on the hunt for something I saw on the Macromedia XML News Aggregator a while ago. Somebody created a page transition in FLEX that looks similar to the Fast User Switching in OSX. It looks like there are different interfaces on the surface of a cube... you can navigate to other interfaces and the cube spins 90 degrees to show the other interface.

Does anybody know where I can find this?
Posted by John at 10:08 am 8 comments:

My apologies for not being as active as I wanted to be on this project. I have been busy with other projects the last couple of months. I just wanted to give you a heads up, I will be releasing Lux under a Open Source license very soon so you people can start using/extending Lux.

I will be releasing it on ukmn.com first so if you want to know as soon as it released, I suggest keeping an eye on our RSS feed.

A quick recap on Lux
The main aim of this engine is for it to be usable in a sense of performance and have a simple API to integrate cleanly into other AS3 projects. I have seen many ActionScript 3D engines done in flash but many are over complicated, try to do too much and can be slow for simple tasks. I do not plan to add features like texture mapping, model loaders and animation as I want this to remain extremely lightweight and most importantly fast!

I have also included a few primitive objects that will allow you to learn how to construct your own objects.

I have just added lighting to Lux... allowing you to add as many light sources as you like. If you have a moment, would you mind testing the performance? If you press and hold on the flash it turns depth of field on... can you comment on your os/browser/cpu and the two speeds(with/without dof)?

I am having a problem with depth sorting in a 3D environment... I have tried numerous approaches but come across problems with certain situations.

My current method involves finding the z value of an objects point furthest from the camera and sorting objects by that depth. 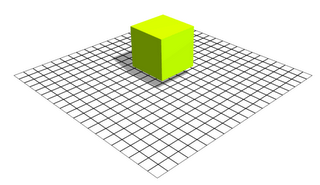 From a side view with camera shown: 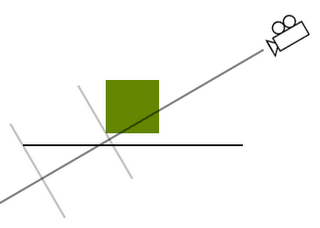 You can see that the grid is further away than the cube, the depth sorting seems to be working fine. But say if I move the camera to be below the grid problems start to occur: 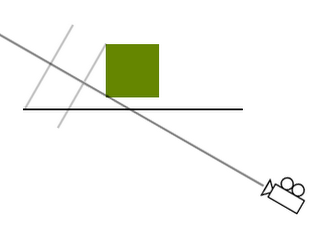 The depth sorting routine still thinks the grid is further away and draws the cube on top of the grid! Has anybody got any experience with this? Can anybody give me some tips?
Posted by John at 3:04 pm 126 comments:

If you have a moment to spare, would you mind trying this performance test? If you press and hold on the flash it turns depth of field on... can you comment on your os/browser/cpu and the two speeds(with/without dof)?

Along side isometric games I have been working on a 3D framework named 'Lux' in AS3, originally started as a AS2 project a while ago. The main aim of this engine is for it to be usable in a sense of performance and have a simple API to integrate cleanly into projects. I have seen many 3D engines done in flash but they are over complicated, try to do too much and as a result run slow. Here is an early demo of Lux...